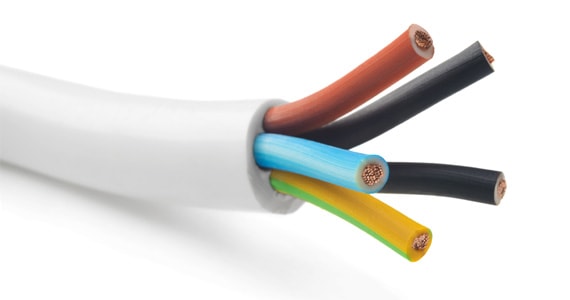 We are positioned amongst the prominent PVC Wires Manufactures in India. The Low Voltage PVC Cables as well as PVC Insulated Cables that we provide are designed and manufacturers by the experts. All our PVC Cables conform to the requisite norms of the industry. Furthermore, PVC Insulated Cables are manufactured with Aluminum and Copper conductors confirming to IS 1554(Part-1)-1988 Indian Standards and to International Standards like BS, IEC, etc. Besides, our Multicore Cables are approved by leading Electrical Consultants companies.

Six Core and above      : Two adjacent cores (counting & direction) in each layer Blue and Yellow,remaining cores Grey.The same sequence as mentioned above along with indelible printing of core numbers or All cores of same colour with indelible numbering on each core in contrasting colour. Other colour in agreement with the purchaser and the manufacturer with number coding.